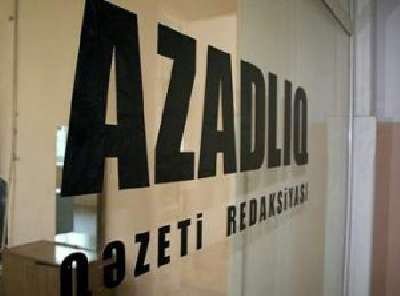 The Chief of the Baku Metro Taghi Ahmadov reconsidered his decision to make the newspaper Azadlig pay him compensation of 30,000 manat at the court claim in installments. Ahmadov refused of his agreement previously given in May of this year for the payment of the money for 10 years - on a monthly basis at the rate of 300-400 manats.
Referring to the fact that the lawyer "misunderstood" him, Ahmadov has filed a complaint in court and demanded immediate payment of the entire amount of the fine. Yasamal District Court of Baku considered the application on October 25 without notifying Azadlig or the participation of the representative of the publisher.

Thus , the amount of monetary sanctions against the newspaper reached AZN 65 000 (83 thousand US dollars).

Earlier, the bank account of the paper was arrested at the suit of the Bina shopping center owner Kabira Mamedova at 32,000 manat. In addition , the court ordered the editor to pay three thousand manats as fine on the complaint of the Department of Bailiffs of the Yasamal district.

Since October 18 in Baku subway there has been a tacit ban on the sale of the newspaper Azadlig.

At the same time , the newspaper cannot get its due sum (55,000 AZN) from the state-owned printing and press distribution firm Gasid. The money was raised from the sale of the paper.

The opposition newspaper is on the verge of closing.

Besides that, external attacks have violated the website Azadlig for two weeks.