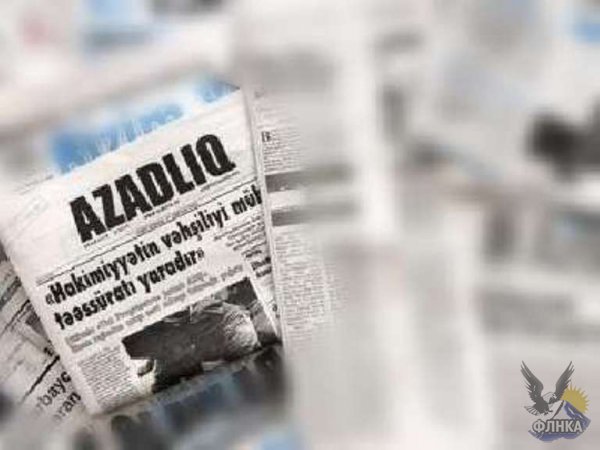 After a run-up marked by flagrant violations of political pluralism and freedom of information, President Ilham Aliyev’s reelection by an overwhelming majority on 10 October 2013, in a poll that the OSCE considered "seriously flawed”, has been followed by new crackdown on the media. The daily newspaper Azadliq, one of the few remaining opposition news outlets, is now in danger of succumbing to efforts to throttle it financially.
On the one hand, a district court in the capital, Baku, froze the newspaper’s main bank account on 25 October after ordering it to pay astronomical damages in a series of lawsuits. On the other,Azadliq’s income has fallen as a result of several restrictions to newspaper sales in Baku. And finally, the company that prints the daily announced on 12 November that it will no longer print it because the debts it has accumulated mean it is no longer able to pay.

"We are very concerned about Azadliq’s desperate financial situation and we think the sanctions imposed on it are manifestly disproportionate,” the organizations signing this statement said. "The way Azadliq has been hounded by the courts betrays a political determination to suppress this opposition mouthpiece. We are very alarmed by the suspension of its print version.”

"Azadliq’s closure would call media pluralism in Azerbaijan into question. We urge the country’s judicial and political authorities to stop hounding it and we call on international solidarity with the daily.”

On 17 October, just a week after the presidential election, the sale of several daily newspapers including Azadliq was banned in metro stations in Baku. This measure, which has deprived Azadliqof 30 per cent of its sales, is just the latest of a series. The ban on newspaper sales in the street and the replacement of the Gasid kiosks by a new kind that no longer sell newspapers had already reduced Azadliq’s sales drastically.

A court order issued on 25 October blocked Azadliq’s bank accounts as the daily failed to pay the damages it had been ordered to pay in a lawsuit brought by the Bina shopping centre’s owner.

The same day, the court approved a sudden new request from Baku metro director Taghi Ahmadov without telling Azadliq’s lawyers. As a result of a lawsuit by Ahmadov, Azadliq had been ordered in May to pay him 30,000 AZN in damages in monthly instalments of 3,000 to 4,000 AZN for ten years. Accepting Ahmadov’s claim that his lawyer misunderstood his wishes, the court has now approved his demand for immediate payment of the entire sum.

Sued more than 10 times, Azadliq has routinely been ordered to pay excessive amounts in damages, in all totalling more than 65,000 AZN (about the same amount in euros). Its accounts were frozen for the first time on 5 November 2012 in order to obtain the sum of 4,200 AZN that it had been ordered to pay in a lawsuit brought by the businessman Anar Mammadov, transport minister Ziya Mammadov’s son.

Azadliq’s financial plight has been exacerbated by the press distribution company Gasid’s refusal to pay what Azadliq is owed from sales, now more than 47,000 AZN.

Azerbaijan, the company that stopped printing the newspaper on 12 November, is currently seeking payment of 20,000 AZN and is demanding 5,000 AZN of it at once. For the time being,Azadliq is continuing to produce an online version but the loss of its print version is depriving it of many of its readers, as well as much of its remaining revenue.

Fearing for Azadliq’s survival, editor Ganimat Zahid is appealing to civil society for financial and legal aid and is openly denouncing the political nature of the persecution to which it has been subjected. The credibility of his claims are reinforced by the fact that everyone who sued the newspaper is close to the government and both the distribution company Gasid and the printer Azerbaijan are state-owned.

Many members of Azadliq’s staff have been individually persecuted in connection with their work. This persecution has taken various forms including countless cases of threats and physical attacks. Some, including Ganimat Zahid himself, have served long jail sentences on trumped-up charges.

Rashad Ramazanov, a blogger who uses the pen-name of Rashad Agaadin, was sentenced on 13 November to nine years in prison on a charge of "drug trafficking” (based on article 234.4 of the penal code). The same day, the editor-in-chief of P.S. Nota newspaper, Sardar Alibeili, was sentenced to five years in prison for "hooliganism” (article 221.3 of the penal code). Their colleagues believe that the prosecution of both men was politically motivated and that they were being punished for criticising the government.

Publishers are also being targeted. The headquarters of the independent publishing house "Ganun” were overrun on 1 November by around 20 people, of whom three wore the uniform of the finance ministry while the others wore plainclothes. Computers, tax and legal documents were confiscated. "Ganun” is well known for publishing works of a political, independent and opposition nature.

While covering a demonstration called by the opposition to challenge the election results on 12 October, seven journalists were physically attacked by police, stripped of their material and briefly detained.