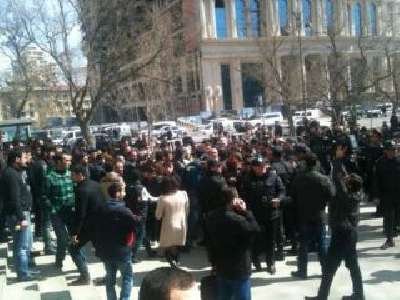 Baku/14.03.14/Turan : Traders working in the stalls in the subway stations held March 13 meeting with representatives of the Municipality. Turan was told by one of the traders , who requested anonymity.

According to him, employees of City Hall offered them a choice of three places: Amay Mall , a shopping center near the Keshla Bazaar and a new facility to be built in the Narimanov district of the capital.

According to the source, the traders do not agree with the proposal, because of fear of losing their clientele. At the same time, they were warned about the inadmissibility of protests.

Recall that on March 12 subway traders held a rally, which resulted in detainees, which were fined at 40 manats.

At today's plenary session of the Milli Majlis deputies also raised this issue . In particular, MP Fazil Mustafa said that because of the trade in the underground there is an unsanitary situation and the movement of passengers is difficult. At the same time the MP believes that the government should solve the problem of traders, who paid for their market places. The state should solve the problems of their citizens, said the deputy. Our attempt to get comments in the Municipality, the Baku Metro and the Presidential Administration failed.