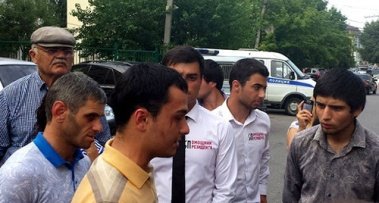 In the capital of Dagestan, 23 activists of the movement "I'm President's Assistant" were detained; four of them were hospitalized from the police station with traumas. At the moment, all the detainees are at large, said the movement.

The "Caucasian Knot" has reported that on Thursday, 10 activists of the above movement were brought to the police station of the Sovietskiy District of Makhachkala. According to their story, they were detained for filming a detention by policemen of a man who was smoking in the street, while policemen themselves were smoking in a wrong place. According to an eyewitness, some of the activists were beaten up by the police.

When other activists of the movement with cameras arrived at the police station, seven of them were also detained.

A crowd gathered at the building of the police station of the Sovietskiy District and demanded to release the detainees. The bosses from the Ministry of Internal Affairs (MIA) have assured that if the policemen's wrongdoing was confirmed, they would be punished, the RIA "Dagestan" reports.

The youth movement "I'm President's Assistant" (known as YaPP) declares its aim as attracting young people to the solution of social problems of Dagestani residents. The campaigners say they are ready to help in the fight against corruption, promote youth employment and help the head of Dagestan in creating the civil society.