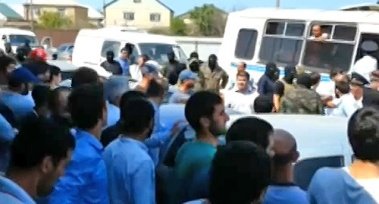 On August 22, after the end of Friday prayer at one of the mosques in Derbent, law enforcers detained 40-60 mosque-goers, eyewitnesses of the incident report. Two buses took the detainees to the Derbent GOVD (City Interior Division).

The "Caucasian Knot" has been told by one of the participants of the events that after the Friday prayer, the mosque "Ahlu-s-Sunna" located in Airport highway in Derbent was cordoned off by men in uniform.

"This time, everything was organized not in such a rude form as usual. The detained mosque-goers were brought to the police station, identified, fingerprinted and then released," the source has stated.

According to the mosque-goers, the detention was carried out by more than 30 officials from various law enforcement bodies, including policemen and armed men in masks. By 8:00 p.m., all the detainees were released from the police station. This information was confirmed by the Derbent GOVD.

On May 18-24, at least four persons fell victim to armed conflict in Northern Caucasus