On May 18-24, at least four persons fell victim to armed conflict in Northern Caucasus 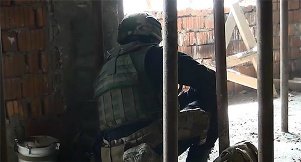 During the week of May 18-24, 2015, at least four persons fell victim to the armed conflict in Northern Caucasus. Of them, two persons were killed, and two others were wounded. These are the results of the calculations run by the "Caucasian Knot" based on its own materials and information from other open sources.

The death toll includes a suspected member of the armed underground and a law enforcer from Dagestan.

On May 18, at about 11:00 p.m., Israel Akhmedov, a staff member of the Department for the Tsuntin District of the Russian Ministry of Internal Affairs (MIA), was found with four gunshot wounds on the fifth kilometre of the Makhachkala-Buynaksk road. He was brought to the central hospital of the city of Makhachkala, where he later died.

On May 19, at about 8:00 p.m., during operative and search activities carried out in Izberbash, law enforcer tried to stop a Kia Spectra car to check the documents. The driver opened fire on them and was killed by return fire. No policemen suffered as a result of the incident. The killed attacker was identified as Nuridin Magomedov, a native of Izberbash. The police collected operative materials on him as an active accomplice of members of illegal armed formations (IAFs). A Makarov pistol and a grenade were found near the killed attacker.

On May 18, in the village of Ikra of the Kurakh District of Dagestan, where a regime of counterterrorist operation (CTO) was introduced on May 17, law enforcers carried out targeted inspections of some houses. During the inspections, the law enforcers detained two residents of the village of Ikra, including a teacher of the Kutul school and an unemployed local resident. According to an advocate, who represents the interests of two persons detained during the CTO, in total, at least five persons were detained in the district. On May 22, at 11:00 a.m., the CTO regime was cancelled by the decision of the Dagestani operational headquarters of the National Antiterrorist Committee (NAC).

On May 23, at about 5:00 p.m. Moscow time, an explosion of an unidentified explosive device occurred in a forest area not far from the village of Plievo of the Nazran District of Ingushetia, near the Plievo-Achaluki road, when staff members of the Nazran ROVD (District Interior Division) were carrying out search operations. As a result of the explosion, two policemen were contused.

On May 18, the police detained a resident of the village of Novo-Gagatli of the Khasavyurt District of Dagestan on suspicion of aiding and abetting members of the armed underground. During the search of the suspect's house, law enforcers seized a Kalashnikov submachine gun with full magazine.

In the evening of May 18, the police detained about 10 mosque-goers of the Al-Shafi'i Mosque in Imam Gazimagomed Street (the former Makhachkala highway) in the town of Buynaksk. At 9:10 p.m., four UAZ cars with armed men in masks approached the mosque. The armed men were standing at the exit of the building and detained everyone, who came out of the mosque after a night prayer. The armed men forced the mosque-goers into their cars and brought them to the Buynaksk GOVD (City Interior Division). At night of May 19, all the detained mosque-goers were released from the GOVD, after they had been fingerprinted, photographed, and registered in the lists of "Vahhabis". One of the detainees had been beaten.

On May 18, in Grozny, during the operational activities, law enforcers detained a native of the village of Gvardeiskoe of the Nadterechny District of Chechnya on suspicion of aiding and abetting members of illegal armed formations. During interrogation, the detainee confessed that since 2012, he used to provide food, medical supplies, and equipment to members of a criminal grouping operating in the forested and mountainous terrain of the republic.

On May 20, in the course of the operational activities, Chechen law enforcers detained a resident of Urus-Martan on suspicion of aiding and abetting members of the armed underground. During interrogation, the detainee has confessed that starting from spring of 2012, he used to provide members of illegal armed formations (IAFs) with a place to stay, and he supplied them with food, medicines, and bought vehicles for them.

On May 22, at about 11:00 a.m., the apartment house in No. 47 in Nikolaev Street in Makhachkala was cordoned off by law enforcers and staff members of another agency, who were in masks, armed, and in camouflage. They carried out a search at the apartment of Raikhan Sheikhova, a widow of Bammatkhan Sheikhov, one of the leaders of Dagestani militants, who was killed in 2013. The owner of the apartmentwas detained together with her guests Asiya Magomedova and Rumiya Gadjieva.

On May 22, the police detained a resident of the village of Gvardeiskoe of the Nadterechny District of Chechnya on suspicion of aiding and abetting members of illegal armed formations (IAFs). During the interrogation, the detainee confessed that in the period from spring of 2013 to autumn of 2014, he rendered assistance to IAF members: he used to buy clothes, medicines, and medical supplies for them. The detainee was released and obliged to visit the police station. The issue of opening a criminal case is under consideration.

On May 18, 31-year-old Zamir Pashaev disappeared in the village of Berikei of the Derbent District of Dagestan. During several days, he and his family members were outside the city. On May 18, they returned to Derbent; however, Zamir decided to visit the village of Berikei, where a family's house was under construction. In the afternoon, he called up his family; however, since 6:00 p.m., he stopped to answer the phone calls. Since then, his fate is unknown. Zamir Pashaev is a strict practicing Muslim, who wears a beard and visits the Salafi mosque in Derbent. He has been registered at the police station. Together with other Salafis, he was at least twice brought to the Derbent ROVD (District Interior Division). The family members of Zamir Pashaev have filed to the Derbent ROVD a complaint about his possible kidnapping, and officials of the ROVD have reported that they carry out activities to find the disappeared man.

On May 22, relatives of Magomeddjavad Khizriev, a 47-year-old resident of Derbent, reported on his possible kidnapping. On May 19, at 11:00 a.m., his wife spoke to him by phone for the recent time. Since then, his family members know nothing of his whereabouts. Magomeddjavad Khizriev is a Muslim, who observes religious rites. He has not been registered at the police station, and he got no criminal and administrative records. He used to be engaged in repair and construction works. Officials from the Derbent GOVD (City Interior Division) have refused to comment on the information that Magomeddjavad Khizriev may be among the detainees and referred to a lack of authority for commenting.