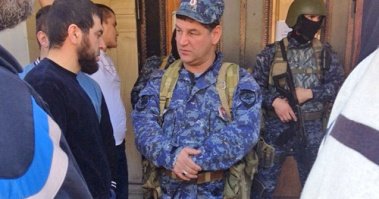 A mass detention of mosque parishioners took place in the city of Buynaksk. All the detainees were later released, eyewitnesses have reported.

On May 8, after the Friday prayer, some 10-15 parishioners of the mosque, located in Makhachkala Highway, were taken to the city police station and released in the evening, a Buynaksk resident Magomed M. told the "Caucasian Knot" correspondent.

"No policeman can explain the grounds, on which they put us on some lists, if the person is accused of nothing," said Magomed M.

On May 8, at the exit from the mosque, a man in camouflage uniform with a video camera asked each parishioner to introduce himself and tell his address of residence, said the parishioner who introduced himself as Akhmed.

Some parishioners "expressed their indignation, but when you see police UAZ vans behind, it's rather difficult to prove your rightness," Akhmed has added.

Those mosque-goers, "who refused, when coming out of the mosque, to tell their personal data to the video camera were detained," said another parishioner of the Buynaksk mosque.