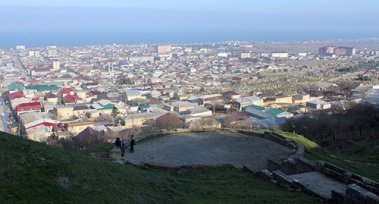 The protesters, detained during the action against the detention of Imam Gadjirasul, have been released from the police, said one of the employees of the mosque. According to his story, the Imam urged parishioners to disperse.

The "Caucasian Knot" has reported that at least 300 parishioners gathered today in front of the GOVD of Derbent, opposing the detention of the Salafi Imam in the district "Airport". According to eyewitnesses, power agents fired into the air, beat up the protesters and detained at least 20 of them.

As stated by one of the employees of the mosque, the police "set free all those detained during the dispersion of the action" (update of 5:15 p.m. on February 10, 2016: According the employee of the mosque, about 10 people were released, and about the sane number, as of 5:00 p.m. were still kept there).

In the evening on February 9, residents of Derbent reported about the detention of the Imam of a Salafi mosque in the territory of the district named "Airport". A group of parishioners gathered near the GOVD, demanding to release the Imam. At night, the protesters moved to the mosque, which was cordoned off by power agents.