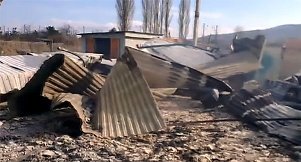 In Derbent, a fire at the "airport" mosque occurred on March 17, at about 2 a.m. in the morning. No one was injured. The building of the Salafi mosque in Derbent is completely burned down, the "Caucasian Knot" correspondent was told by believers of the mosque. According to them, fire-fighters ignored their requests to extinguish the fire.

On February 9, Gadjirasul Guseinov, the Imam of the "airport" mosque, was detained.Law enforcers suspected him of illegal deprivation of liberty of a Derbent woman and her child. The believers of the mosque held actions of protest and demanded to stop persecuting the Imam.

The believers of the mosque suggest that the Salafi mosque in Derbent has been burned down as a result of an arson attack. "There was a series of events, and they give us the chance to say with certainty that it has been an arson attack. Our Imam was arrested, and then we were not allowed to elect a new imam. After the arrest of the Imam, people were actually frightened to prevent them from visiting the mosque," the "Caucasian Knot" was told by a believer.

"A month ago, the power supply to the mosque was cut off. Then, the believers brought a generator. Law enforcer noticed that the mosque was still functioning and came there. They seized the keys and locked the mosque completely. Four days ago, about ten believers had been kept at the police station until the morning. And then, the mosque was burned down," claimed a believer who preferred to remain anonymous.

According to him, the mosque was "completely burned down". Meanwhile, "fire-fighters did not come to extinguish the fire." "We called the fire department, but nobody came," claims the believer.

In turn, the spokesperson for the Dagestani Ministry for Emergencies (MfE) has reported that they received no calls from residents of Derbent with a request to extinguish the fire.