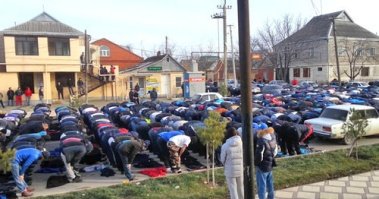 Today, the members of the Salafi community of Dagestan have come to Khasavyurt to take part in the Friday namaz and sermon in the "Vostochnaya" (Eastern) mosque. The Imam of the mosque Magomednabi Magomedov stated the inadmissibility of further pressure of power agents on Salafis, and urged the members of the community to be united and seek protection of their rights by peaceful means.

The "Caucasian Knot" has reported that in late January in Dagestan the situation with Salafi mosques escalated: on January 29, the mosque in the Makhachkala settlement of Shamkhal was closed; and on January 31 – the "Severnaya" (Northern) mosque in Khasavyurt was also closed. The latter was reopened on the following day – after townspeople staged a mass march and held talks with the city administration. On February 2, the Imam of "Severnaya" was replaced.

The Friday namaz and sermon in the Salafi mosque "Vostochnaya" in Khasavyurt had been announced in advance, a source from the mosque told the "Caucasian Knot" correspondent.

According to estimates of the mosque-goers, interviewed by the "Caucasian Knot" correspondent, from 8 to 15 thousand people came to pray at the "Vostochnaya" mosque.