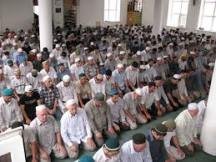 Mass detentions of mosque-goers in Buynaksk will not affect the security in the region. However, those detentions suggest discontinuation of the policy of dialogue, and that can lead to non-transparency of activities of the Salafi community. This opinion has been expressed by experts.

The "Caucasian Knot" has reported that on May 8, residents of Buynaksk reported mass detentions of mosque-goers. According to witnesses, by the evening of May 8, all 15 persons, who were brought to the police station, were released. In their turn, officials from the Buynaksk GOVD (City Interior Division) refused to comment on the incident in the mosque.

According to Alexei Malashenko, a member of the Scientific Council of the Moscow Carnegie Centre, increasing the state pressure on alternative Islamic communities in the region could be dangerous.

Alexei Malashenko has emphasized that "in case if the state subjects Salafis to permanent pressure, then this will contribute to their isolation and withdrawal from the legal field."

The systematic pressure on the Salafi community can result in cease of public preaching and non-transparency of its activities. This opinion has been expressed by Akhmet Yarlykapov, the Senior Researcher of the Department of Ethno-Political Studies of the Institute of Ethnology and Anthropology of the Russian Academy of Sciences (RAS).

"The authorities fail to continue the policy of Magomedsalam Magomedov (the former leader of Dagestan, who resigned on January 28, 2013, note of the "Caucasian Knot") on reconciliation and dialogue. I believe the Sufis can decide to leave open space," Akhmet Yarlykapov has noted.