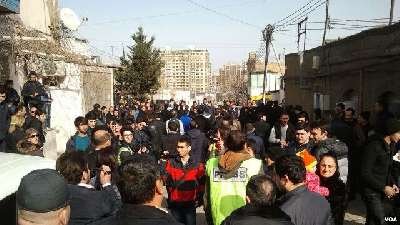 Police forces and rapid reaction regiment of the Interior Ministry prevented a protest of tenants in the former Sovetskaya Street and adjacent neighborhoods. People intended to protest the compensation offered by the authorities for the demolition of their homes. It was announced through the social networks that a rally will take place at 14:00 in front of the school N173 in the Narimanov Avenue (former Sovietskaya Street.)

However, since the afternoon a cordon of police surrounded the school. Ten buses filled with officers of the rapid response regiment of the Interior Ministry and the same amount of post-patrol cars gathered there. Police pushed people trying to gather in front of the school into the surrounding streets. One person was arrested.

The ousted citizens said they would fight to the end until they receive fair compensation. They also demanded the release of arrested activists during a rally in Sovetskaya Street on March 3.

Local residents, especially those with small living space believe that 1500 manat per 1 square meter is not enough to purchase housing in the city.

Previously Deputy Prime Minister Abid Sharifov promised to consider in a special order the issue of compensation for this population . The authorities claim that the houses of those who do not agree with the compensation will not be demolished. However, people do not believe the officials.