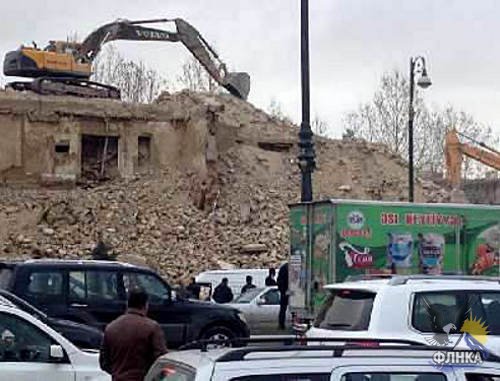 A dismantled five-storey building collapsed onto the roadway in the centre of Baku, in Geidar Aliev Avenue. Two people were lost.

The police have identified them as Djavid Adalat oglu Bairamly, born in 1992, and Asiman Salman oglu Alekperov, born in 1988, Narimanov district police office in Baku told the "Caucasian Knot" correspondent.

The collapse occurred during the dismantling works. The builders lifted an excavator to the upper floors of the building, where it was breaking the walls around it; however, one of the blows was so strong that the walls of the house collapsed onto Geidar Aliev Avenue, damaging the passing cars.

A Mutsibishi Pajero car with two men inside was mostly damaged. Rescuers took the young men out from under the rubbles, but they died during hospitalization.

Another injured person was taken to hospital. Besides, the collapse of the building damaged six other cars, the "Interfax" reports.