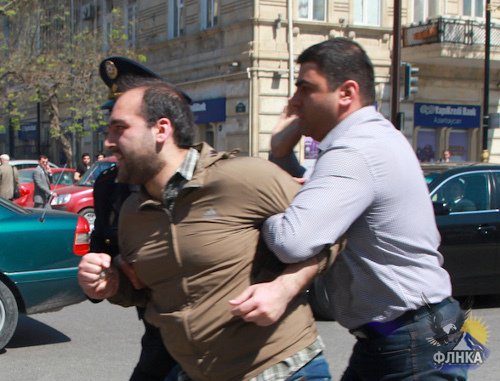 Today, the Baku police prevented the action in memory of victims of the massacre at the Azerbaijan State Oil Academy (ASOA) in 2009.

The action in memory of the victims of the massacre at the Oil Academy was stopped by the police. Photo report of Aziz Karimov, the "Caucasian Knot" correspondent.

The action to pay tribute to the fourth anniversary of the tragedy was scheduled for 03:00 p.m., and activists coordinated their actions through social networks. In particular, the youth wings of the Popular Front Party of Azerbaijani (PFPA), the Civil Solidarity Party, the "Musavat" Party and the Youth Movements "Nida" (Shout) and "Free Youth" declared their support of the action.

Starting from the noon, the area around the monument to Jafar Jabbarly and around the Oil Academy was under strict control of the police. At about 02:00 p.m., policemen began to hinder gathering of young people at the monument.

A group of 50 young people marched along the seaside boulevard and laid flowers at the spot where, in the evening, it was planned to hold a concert of Mustafa Ceceli, a Turkish pop star, on the occasion of the 90th anniversary of the late President Geidar Aliev. The young people left the place by the time when the police arrived.

"It was our protest against holding a concert on the day of anniversary of the tragedy at the Oil Academy. Perhaps, the organizers of such a magnificent concert in the boulevard forgot that on that date, in Azerbaijan, the terror act was committed that took the lives of 12 young people," the "Caucasian Knot" correspondent was told by one of the protesters, who did not introduce himself because of fearing "further problems at the university".

Another group of 50 young people decided to hold an action in another place. They went to the "Sakhil" Park, where they began to chant the slogan: "No Terror!"

The police squads hastily redeployed to the place dispersed the young people. Meanwhile, Abulfaz Gurbanly, the head of the Youth Committee of the Popular Front Party of Azerbaijan (PFPA) and Turgut Gambar, a member of the Board of the Movement "Nida" (Shout), were detained. This was reported by Elvin Badalov, an activist of the Movement "Nida".

Officials from the Chief Police Department of the city of Baku motivated suppression of the action by the fact that it was not coordinated with the City Mayoralty.