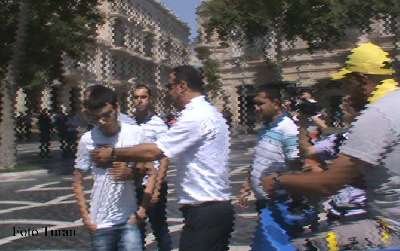 Silent protest in the Fountain Square demanding the release of the arrested youth activists, appointed for today by an anonymous group in facebook, seriously alarmed the law enforcement agencies.

Although the event was scheduled for 15:00, in the afternoon the Fountain Square was taken under police surveillance. The police with truncheons patrolled the area.

Several post-patrol cars were behind the cafe "McDonald's", and near the parks in Khagani and Sahil.

By 15:00 the outside cafe "McDonald's" gathered a large group of officers from the senior officers led by Deputy Chief of the City Police, Sahlab Bagirov. However the Major-General, but he was dressed in civilian clothes.

The people dressed in civilian clothes were not less than the policemen.

As soon as the law enforcement officials noticed small groups of young people and even teenagers, they strongly recommended leaving the area.

Despite the hot weather and the hot sun, the Office of Municipal Administration "Improvement" has suddenly decided to start cleaning the Fountain Square.

Five washing machines suddenly appeared at the site where the action was planned. Randomly moving around this part of the area they interfered with the work of the media.

When a young man appeared in the square and stood motionless, one of the cars turned towards him, but the young man did not flinch.

Individuals in civilian clothes grabbed the young man, and removed him from the area.

The police prevented even shooting of leaflets tossed by someone. "Do not take our youth!" were written in the leaflets.

Another young man also decided to protest alone, and covered his mouth with his hands. However, the police in civilian clothes immediately attacked him and took away from the area. But he managed to introduce himself as Vugar Aslanov, a member of the "Open Society» party.

The police, however, did not allow the journalists to take the images of his detention.

Being asked to explain the reasons for the detention of a young person, and who else were arrested due to the Sunday's action, the deputy chief of the City Police, Bagirov, said that no one was detained.

"There was not any action, so no one has been even arrested, » said Bagirov.

The action "Stop illegal arrest!" was announced at 15:00 on July 21 by anonymous group of Facebook users.

The action was planned as a silent flash mob demanding the release of arrested activists.

Since the beginning of the year on criminal charges have been arrested seven youth activists from NIDA Movement, one from "Free Youth" Movement, and one from the Youth Committee of the Popular Front.

On July 15 three other young activists were sentenced to 15 days arrest.