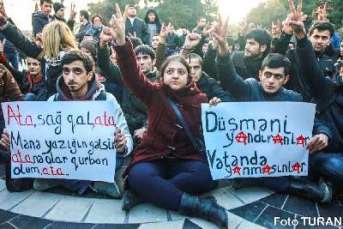 Baku/29.12.13/Turan : On Sunday, police violently dispersed a protest on Fountain Square in downtown Baku against death of a disabled Karabakh war, Zaur Hasanov, who died from self-immolation.
The action was assigned through social networks on the Internet at 16:00; but form the noon the area was under surveillance of the police and men in civilian clothes. Around the square were concentrated several buses with employees of Rapid Respond and other secret forces, as well as water-jet machine.
At 16:30 about 50 young people staged a sit-share from cafes near McDonald's , raising placards with slogans condemning the violation of the rights of persons with disabilities and war veterans. When it began to approach the police, they began chanting slogans like "Let veterans do not burn, do not turn the army into a morgue," "Freedom," " Do not burn the veterans. "Police became violently disperse young people and detaining the most active.
Among the detained youth activists from various opposition groups - Alice Turkel , Beyim Hasanli, Togrul Ibrahimli, Orkhan Carchy , Emil Salim , Kamala Bananyarly , Kamil Akhmedov , Rufat Hajibeyli , Turkel Azerturk, Tural Sadigov, Khayyam Mammadov, and Samir Poladov, etc.
The police then began to drive away from the territory of the area of all "suspicious" of young people seeing them as potential demonstrators.
The roads from different sides to prevent the arrival of new groups of protesters were blocked.
According to opposition sources , at least 20 people were detained.
The second group of disabled of the Karabakh war,Zaur Hasanov, on December 25 committed self-immolation in front of the Confederation of Trade Unions in protest against demolishing his cafe. Hasanov died on December 28 , and Sunday was buried in the cemetery in the village Bibiheybat.
Today, died his uncle , Huseyn Huseynov. A 64-year-old man died of a heart attack right on the funeral ceremony at home Hasanov, because he could not stand the death of his nephew.—06В--
Youths protest in central Baku
Baku/29.12.13/Turan : Activists of youth organizations held on Sunday at 16:00 hours at Fountain Square in downtown Baku sit-in protest in connection with the self-immolation of a disabled Karabakh war , Zaur Hasanov .
Unsanctioned rally was dispersed by the police. More than ten people were arrested . The area is surrounded by a large force of police.
Zaur Hasanov has committed an act of self-immolation on December 25 after Mehbaliev was ordered to demolish his little cafe that was the only source of income of a large family disabled . On Sunday he was buried in the cemetery Bibiheybat in Baku.