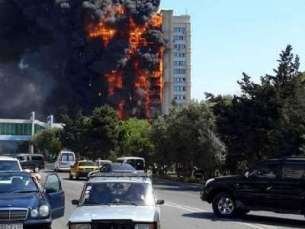 The deputy head of the Ministry of Emergency Situations Etibar Mirzoyev told reporters that residents who stayed in apartments, waiting for assistance, survived. Mainly those who tried to leave the burning building died.—06В-

Seven people  have been placed in the toxicological department of the Clinical Medical Center, one - to a burn center, two - to the city hospital N6, 3 - Institute of Trauma and Orthopedics. The rest of medical care was provided on site.

According to rescuers, the number of victims will increase while  checking the apartment building where at the time of the fire  there could be  hundreds of people. -06D-

The number of victims of the fire in the 16-storey building at Azadlig Avenue has reached 6 people, according to the Ministry of Health.

Two of the victims are young children. Another 20 people were hospitalized. Some people were evacuated. The fate of many people remains unknown.

According to recent reports, the fire has been localized. -06B-

Visiting the site of the fire in a 16-storey residential building, Prosecutor General Zakir Garalov told journalists that, according to preliminary information, the fire killed 4 people and 14 were injured. There are also victims among firefighters.

To investigate the cause of the fire a joint investigation team has been set up by the Interior Ministry, Emergencies Ministry and Prosecutor General's Office, said Garalov.

Experts are involved in the investigation. "According to preliminary information, the cause of the fire was the poor quality of cladding of the building. Acts of reception and delivery of the site have been taken from the executive bodies. The case will receive the due assessment," said Garalov.

According to the City Ambulance Station, 15 people have been hospitalized, including 7 in the toxicological department of the Clinical Medical Center N 1.  -06D-

The fire in a 16-storey building on Azadlig Avenue killed two people. One of them was killed after he jumped from a window. The second victim was a small child, who suffocated in the smoke.

The number of victims has exceeded 15 people, according to the Ministry of Health. Firefighting measures continue, using helicopters of MOE. -06D-

The 16-storey building on Avenue Azadlyg 200/36, near the metro station Azadlyg has caught fire. The flame covered the facade. According to the witnesses, the fire recalled a similar incident on Zykh Highway two months ago, when the new foam plastic cladding of a building caught fire.

The Ministry of Emergency Situations informs of measures to quench the fire taken by firefighting forces.

The Intellectual Transport Management Center ordered to limit the traffic on Avenue Azadlyg in the area of the fire. Drivers are encouraged to use an alternative way via Shovket Mammadova Street.