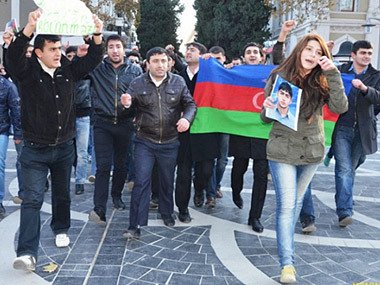 The experts of the center believe that such a large number of suicides in the Azerbaijani army causes serious concerns among the society, moreover the profession of the military itself creates distrust towards the Armed Forces of Azerbaijan.

According to the newspaper, the relevant structures, in particular, the Azerbaijani Defense Ministry have not expressed their official disposition about the increasing number of losses in the army. Representatives of the Ministry claim in the comments given to various media that it is not possible to disclose the amount of losses in the defense sector, regarding the factor of preservation of military secret. However, independent experts disagree. According to them, in developed countries, as well as in some developing countries which have achieved some progress in army-building, the statistics of losses in defense and security sector is not concealed from the public.

In order to reduce the number of soldiers' deaths "Doctrine" Center offers to provide the public with information about each case of soldiers’ death and injury and the results of investigation carried out in the Azerbaijani Armed Forces. The activities of the Military Prosecutor's Office and the Ministry of Defense carried out in this direction should be transparent. Closeness in this sphere creates a climate of impunity in connection with the deaths of the Azerbaijani soldiers in non-combat conditions, experts of the Centre believe.

Moreover, it is necessary to carry out consistent educational activities in the military units to elucidate the rights of the servicemen, "Doctrine" experts say.

"The social protection and improvement of living conditions of the officers should also be provided. Often extortion by officers and soldiers cause hazing in the army. Officers receive rent allowance equal to 49 manats, while even in the countryside you cannot rent an apartment on that money. The salary of the officers in the rear is low too. Lieutenants receive only 450 manats ($ 575 – edt.). Their salaries should be increased at least by 1000 manats ($ 1,275 – edt.)," reads the article.

"Doctrine" also considers it important to implement a gradual transition to a contract system and stop system of accepting recruits in the Azerbaijani Armed Forces. In addition, the process of attracting civilians to military posts should be expanded. "In general, a strategy of Armed Forces construction should be carried out in the country, for the soldiers to see clearly what awaits them in the future. Today there is atmosphere of distrust among military towards this profession. This is unacceptable," Azerbaijani experts believe.

"Doctrine" believes that if these measures are not undertaken the noncombat losses will continue in the Azerbaijani Armed Forces.

According to the "Doctrine" 28 Azerbaijani soldiers were killed, another 35 were injured since 1 January to 15 April 2014. 19 out of 28 victims died in non-combat conditions (3 - in a car accident, 1 - for unclear reasons, 3 – as a result of hazing (illegal) actions, 3 - from diseases, 9 people committed suicide). As for the wounded and maimed, 13 of them became the victim of hazing action, 3 - during suicide attempts, 6 - in a car accident, one person was poisoned.

Doctrine: 64 soldiers die in Azerbaijani Armed Forces during 8 months; 55 of them die in non-combat conditions