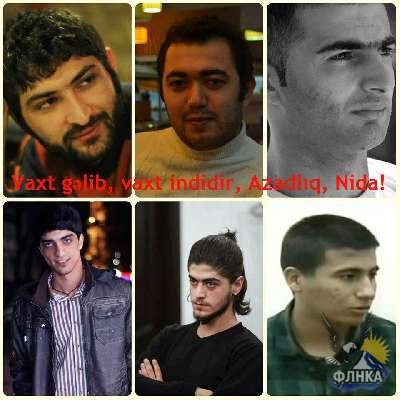 Baku/06.03.14/Turan : Today Baku Serious Crimes Court held a hearing in the case of seven activists of NIDA and member of the organization "Free Youth" Ilkin Rustamzade. I was announced that a number of witnesses will be unable to participate on the hearing due to serving in the army and study abroad. In this regard, their testimonies were read. Thus, a youth activist Tural Shekerli told at the preliminary investigation in connection with the flash mob "Harlem shake" that Rustamzade had no relation to the organization and execution of the flash mob, and placing it on the Internet .

It was in connection with this flash mob Rustamzade was charged with disorderly conduct.
Rustamzade himself does not understand what crime he is accused of. Then the testimonies of Ellada Abbasova and Ruslan Asadli were read, and thereafter, Turgut Gambar , a member of the Board of NIDA, gave testimony as a witness for the defense.

He said that the organization aims to promote the democratization of Azerbaijan. He also pointed out that the involvement of a prosecution witness Anar Abbasov ( claimed during the investigation that NIDA is preparing in Azerbaijan a revolution like the "Arab Spring") has never been a member of the organization, and of course could not participate in the meetings of the organization.

The Court also granted a defense motion to invite as witnesses those who viewed the search in the apartments Bakhtiyar Guliyev, Shahin Novruzlu and Mamed Azizov.

However, the court rejected the defense motion for the previous call as witnesses operatives of the MNS.
The hearing will continue on March 7.

The defendants were arrested in March - April 2013. They are accused of planning riots during a protest March 10, 2013 in Baku against non-combat losses in the army. Young people also are accused of illegal possession of explosives, narcotics and hooliganism.