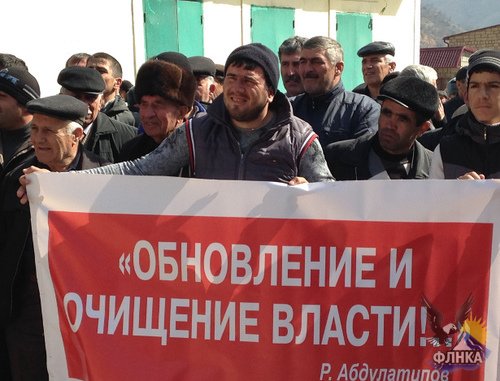 A rally under the motto "Return power to people!" held on March 10 in the village of Khuchni, Tabasaran District of Dagestan, was attended by about 200 people, who demanded to change local power and open criminal cases on embezzlement of funds of the district budget.

Kazikhan Kurbanov, a member of the public anti-corruption board of the Tabasaran District, told the "Caucasian Knot" correspondent that "through the efforts of the board 37 criminal cases were initiated against Tabasaran District leaders, but in spite of that, these bureaucrats are still in their posts."

Migdad Gadjiev, the chairman of the above board, said that the head of the district administration "should start working towards improving the situation in the district education system." He also drew attention to "facts of thefts of budget money and 'kickbacks' from subsidies allocated for the development of agriculture."

The organizers of the rally said that should the resolution adopted at the end of the event remain neglected, they reserved the right to "go on with their protests up to acts of civil disobedience."