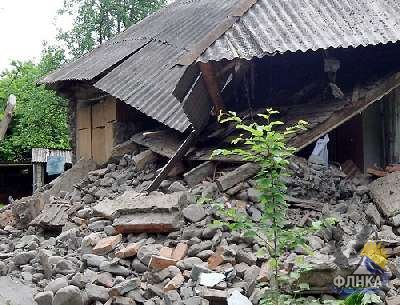 Yesterday's 5-magnitude earthquake in Zagatala caused concern among the population. After tremors the tenants of multistory buildings were evacuated to safe areas. Residents whose homes had been affected by previous earthquakes are recommended to leave them. The deputy chief executive of Zagatala, Elman Ramazanov told Turan.

According to him, the earthquake destroyed two houses in the village of Domba. Partial destruction took place in the villages Faldarly, Sabunchu and Goyam.

The MOE commission headed by Deputy Minister Rahim Latifov arrived in the district. They examine the situation together with the representatives of the executive branch. The technical inspection is conducted by 16 specialists, who together with the local authorities will work in five groups, Ramazanov said.

He also noted that after the earthquake in May and October 2012 400 houses remained not completely built.

"Along with these, houses will be built for the victims now, and those who suffered damages will be paid cash compensation," said Ramazanov.

He also said that there were no visits to doctors in connection with the earthquake, although many citizens have suffered stress.

Recall that the elimination of the consequences of the earthquake May 7, 2012 has been allocated 420 million manat, and for these funds 3,000 houses and 20 schools have been built. Then MOE viewed 28,000 houses, fixing damage of 5,939 houses.

It was decided to demolish 3,545 houses and build new housing. It was also planned to build 35 schools.

However, as reported by the headquarters of the civil society Kura, in November 2012 it was found that about 130 million manat was used for other purposes: in particular, mansions were built for officials of the Presidential Administration and the Ministry of Emergency Situations and their relatives in the Gabala, Ismayilli and Lankaran regions.

At the same time, Gilan Holding erected housing in the disaster zone, costing AZN 500 per 1 square meter, which is equivalent to the price of housing in Baku.

Earthquake in Caspian Sea near Nardaran