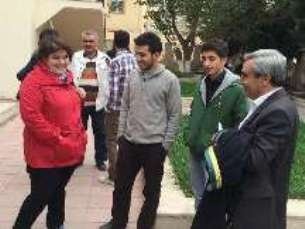 Binagadi District Court today continued the hearing on the lawsuit from Elman Hasanov (Turkoglu) against the journalist Khadija Ismayilova.

Recall that the lawsuit was filed by the former activist of the Classic Popular Front Elman Hasanov, who accuses the journalist of libel and slander of his honor and dignity. According to the version of the plaintiff, the journalist published a secret document of the Ministry of National Security (MNS) that Hasanov is a secret agent.

As Ismayilova told Turan, at today's hearing, the judge announced that the document came from MNS that Ismayilova circulated two texts about Hasanov, and then immediately erased them.

As stressed by Ismayilova, in the letter from MNS there is no evidence that the journalist had extended the texts with the name of Hasanov. "MNS slanders me,” said Ismayilova.

The judge scheduled the next hearing for October 13. However, Ismayilova said that, in connection with a foreign trip, she could not take part in the hearing. In addition, her lawyer Elton Guliyev will be busy on another trial. The judge did not say anything on the matter.