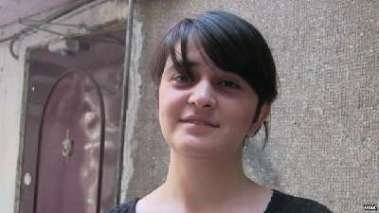 On Monday night, an attack was carried out on the human rights activist and lawyer Gunay Ismayilova. It happened at about 20.30 in the stairwell of an apartment building near the metro station Neftchilar, which is home to Ismayilova.

As Ismayilova told Turan, when she walked into the entrance, a 28-30-year-old male followed her, grabbed her by the throat and tried to cause her bodily harm.

"He grabbed me by the throat and tried to put his hand over my mouth. But I whirled and saw an object in his hand. I started screaming and kicking on the door of the apartment on the ground floor. When the neighbors came out, the man fled. He did not say anything. He was of medium height. But he did not have the purpose of robbery, because he did not try to snatch my bag. In his hands there was something, and he was trying to hit me wirh this thing," said Ismayilova.

Ismayilova informed the duty service 102 MIA on the incident. After that police arrived at the scene.

Ismayilova's sister said she saw the man described by the activist near their home last days. He looked toward the balcony of the apartment, in which the Ismayilova sisters live.

Gunay Ismayilova was Deputy Director of the Institute for Reporters Freedom and Safety (IRFS). Currently, she protects the rights of this institution.

The IRFS office was sealed after it was searched by the prosecutors.

Ismayilova as well as other employees of IRFS were repeatedly questioned by the investigation.

The prosecutor's office has banned her from leaving the country.

H.Ismayilova: Charges against Me Are Dirty PR