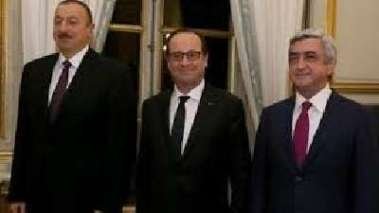 The French President Francois Hollande in late April will make a tour to the South Caucasus, during which he will hold talks with the Presidents of Azerbaijan and Armenia over the Nagorno-Karabakh conflict. This was announced by Secretary of State for European Affairs of France Harlem Desir.

"Paris will make every effort to resolve the Nagorno-Karabakh conflict and protect the right to self-determination in the region,"  Desir was quoted by Novosti-Armenia. The diplomat noted that the current status quo does not meet the interests of either Azerbaijan or Armenia.

"Therefore, the President of the Republic, desiring to promote the resumption of diplomatic initiatives, convened on 27 October 2014 a summit of the Presidents of Armenia and Azerbaijan (Serzh Sargsyan and Ilham Aliyev). During this meeting, agreement was reached on the first step of the humanities - the exchange of information about the missing," recalled Harlem Desir.

"The tension of recent months demonstrates the urgent need for implementation of these principles. Therefore, France will actively continue its efforts in this direction," he concluded.

Last fall Hollande organized a meeting between the Presidents of Armenia and Azerbaijan in Paris.

In May last year, Hollande made an official visit to Azerbaijan.