On May 1, residents of South of Russia call to increase wages 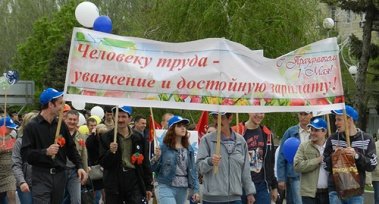 Today, celebrations in honour of May 1 passed in the regions of the North-Caucasian and Southern Federal Districts (NCFD and SFD) of Russia. The participants raised the problems of decent wages and lack of jobs.

In Makhachkala, a festive rally was held by supporters of the Communist Party of the Russian Federation (CPRF). The action held in front of the Kumyk Theater was attended by party activists, veterans of the Great Patriotic War and interested citizens. After the concert, veterans were awarded commemorative medals in honour of the 70th anniversary of the Great Victory, the RIA "Dagestan" reports.

Stavropol has also hosted marches and a rally. The action on the Fortress Hill was organized by the territorial federation of trade unions and was about 2000 strong. Its participants called to double wages in response to the widespread price growth.

Besides, a large-scale May Day rally was held in Sochi, where the demonstrators demanded from the authorities to address the deficit of workplaces and increase salaries of public servants.