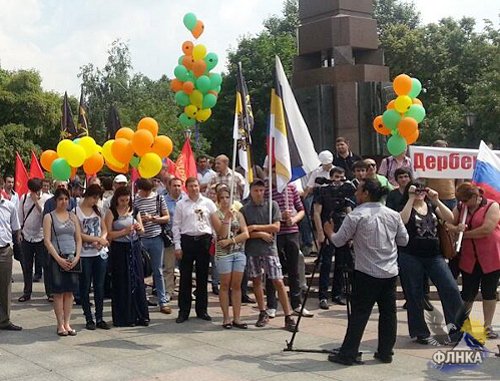 On June 29, Dagestan hosted, within the campaign "Derbent is Russia's Southern Outpost", solo pickets against renaming Sovietskaya Street in the city of Derbent into Geidar Aliev Street. The actions were held in Makhachkala, Kaspiisk, Derbent and Akhty; according to the organizers, there were no incidents. Within the campaign, a 500-person-strong rally took place in Moscow.

The "Caucasian Knot" has reported that the organizers had planned to hold rallies in Makhachkala and Derbent; however, the authorities refused to sanction them.

The picketers claimed infringement of the rights of Avars, Lezghins and other small nations in Azerbaijan, as well as the need to take steps to preserve the territorial integrity of Russia, the lawyer Ruslan Kasumov, who took part in the action, told the "Caucasian Knot" correspondent.

According to the organizers, the pickets passed peacefully; nobody has interfered.

The Azerbaijani authorities made no comments on picketers' statements.