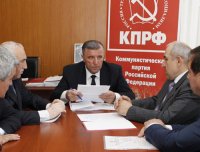 The lawyers of the Dagestani Branch of the Communist Party of the Russian Federation (CPRF) are preparing a lawsuit trying to invalidate the results of the elections of Deputies of the Derbent City Council, Makhmud Makhmudov, the First Secretary of the above Branch has reported.

The "Caucasian Knot" has reported that on September 8, the Russia's united voting day, residents of Dagestan voted – within 74 election campaigns – in 29 districts and in four cities: Derbent, Izberbash, Kizilurt and Khasavyurt.

Makhmud Makhmudov has stated, in his interview to the "Caucasian Knot" correspondent, that there were throw-in of ballots and mass falsifications at the elections to the City Council of Derbent. He added that observers from Makhachkala were not let to the polling stations.

According to the regional branch of the "Spravedlivaya Rossiya" (Fair Russia), another attempt to throw-in 300 ballots was undertaken in the village of Miskindja.

As stated by Samir Abdulkhalikov, the spokesman of the Dagestani Central Election Commission (CEC), all the 74 election campaigns had been declared valid. He added that no serious violations were registered.

The website of the CEC has reported that the winners in all the above cities were their incumbent heads, nominated by the "Edinaya Rossiya" (United Russia) Party.