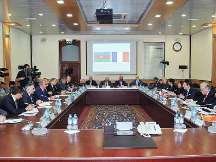 Preparation for the Paris meeting of the French-Azerbaijani governmental commission on economic cooperation  is ongoing, stated the Minister for Foreign Trade, promotion of tourism and the  French nationals abroad Matthias Fekl as part of his two-day visit to Azerbaijan.

The Minister was accompanied by representatives of business circles of France, in particular companies ENGIE and Eiffage, specializing in the field of alternative energy.

During the meeting were discussed issues of expansion of bilateral relations in the economic and educational spheres, particularly in the sphere of high technologies, energy, space.

The French side intends to expand cooperation in the field of education. Earlier in Baku it opened a French school, and now the issue of establishing a pilot French-Azerbaijani University is being discussed.

However, during the meeting the French side expressed dissatisfaction with the position of Paris on Nagorno-Karabakh.

Thus, according to the press service of the Ministry of Communications and ICT, the Minister Ali Abbasov called unacceptable the signing of the Charter of Friendship by three French cities with Armenian occupation administration of the three cities of Nagorno-Karabakh in Azerbaijan.

According to Turan «Charter of friendship" was signed during the visit of  the leader of Nagorno Karabakh separatists Bako Sahakian to France on May  17-19. It was then that agreement was signed on cooperation between the Department of Drome and "Artsakh", the administrative center of Valence and "Stepanakert".

Sahakyan was awarded the title of honorary citizen of the department of Drome. In addition, cooperation agreements were signed between the towns of Villeurbanne and Shusha, as well as between Sarcelles and Martakert.

Mattiias Fekl said that Paris did not support the steps of the local authorities and has expressed a reaction.

On Monday, Mattias Fekl spent an  hour meeting with representatives of civil society, where he got acquainted with their views on the state of human rights and freedoms in Azerbaijan.

According to the State Customs Committee of Azerbaijan, in 2014 the trade turnover between Azerbaijan and France amounted to $ 1 billion 680 million.

The balance of trade turnover (1 billion 366 million) was in favor of Azerbaijan.

From France were imported more than 1000 names of goods totaling $ 157.3 million. During the year, French exports to Azerbaijan decreased by 63% .