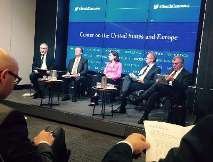 The bilateral U.S.-Azerbaijani relationship was strong an important in the 1990s, even in early 2000s, but now it is ‘almost on the rocks,’ according to top Washington analysts.

"This [current relationship] is a result of the dashed expectations of both sides, not only one side or the other, and a great deal of frustration,”Fiona Hill, director of the Center on the United States and Europe at the Brookings Institution, said on Wednesday, July 15, during an event on Western engagement in the South Caucasus.

The relations between Baku and Washington have been worsening since early last year amid Azerbaijan’s crackdown on its civil society and western institutions. Various U.S. and Europe-based rights groups have accused IlhamAliyev government of muzzling dissent and jailing opponents, charges Baku denies.

"We’re not happy about this current situation either, and are keeping our positive vision,” the diplomat said.

For analyst Fiona Hill from Brookings Institution, South Caucasus is one of the first places where it became extremely apparent Russia, U.S. and EU ‘are not on the same page’ in terms of their perspectives and approaches to the region.

"The US and the EU are viewed as weak and neglectful in the region,” she said during the Wednesday panel over a new Brookings report called ‘Retracing the Caucasian Circle.’

The paperprovides an overview of the geopolitical and security issues facing Armenia, Azerbaijan, and Georgia and their consequences for relations with the West. The report advocates that in spite of major challenges these three actors should not give up on their engagement of the region and should adopt realistic approaches, which can be sustained.

Hill said, the U.S,EU, and Turkey "must work together, rather than separately,” by focusing on the development of "soft regionalism,” building up on people-to-people relationships with the South Caucasus.

Klaus Botzet, head of the PoliticalSection at the EU delegation to the U.S., said that Europe is "committed and is putting considerable resources” in its relationships with Caucasus countries.

In the meantime, he added, "we will not give up our values – democratic values, human rights, free speech and others.These are important and beneficial for all the countries in the region.”

Speaking about the Eastern Partnership, Botzet said, as a matter of fact, the participating countries are already benefiting from the program. Thus, Georgia's exports to European countries has jumped 12% since signing Association Agreement in May, Moldova's 20%.

"We’re now in the face of hard groundwork – reforms need to be made. Fight against corruption, visa facilitation etc.”

Moldova is already benefiting from the visa-free regime. Georgia will also gain similar rights by the end of the year. At the same time European partnership policy remains inclusive – we remain engaged with Azerbaijan, he said.

Speaking about Turkey’s role in the region, panelists drew attention to Ankara’s platform on Caucasus stability and cooperation,which has been launched since 2008. UnalCevikoz, former Turkish Ambassador to Azerbaijan, currently President of Ankara Policy Center, said, the platform was intended to bring an atmosphere of communality in the region.

"Normalization process of between Turkey and Armenia had misunderstandings, not miscalculations,” headded. "This was a logical outcome of Turkish foreign policy back in 2008, as it was trying to open up in the region.”

Ankara was looking for comprehensive Caucasus policy as it had good relations with Baku and Tbilisi and was keeping Yerevan in a separate file. After the signing of Zurich protocols, Armenia was trying to explain the process to its regional partner Russians while Turkey to Azerbaijan.

"But the protocols got stuck with the ratification process in the parliament,” Cevikoz said.

Amid recent regional challenges Ankara currently is mostly focused on its own South and Caucasus is not a ‘number one’priority of Turkish foreign policy. ‘This doesn’t mean, however, that we should forget South Caucasus,’ he said, adding the importance of "soft regionalism” platform towards the region.

Washington hopes for ‘renewed commitment’ between Baku and Yerevan

Panelists also highlighted increasing tension in the region over the territorial conflicts, including Nagorno-Karabakh in particular.

Washington supports "multiple tracks” model on the conflictresolutions in the region, which would involve people to people and other parallel efforts along with diplomatic process.

"Small reforms should progress concurrently with peace talks,” he said, adding Washington hopesthat ‘there will be a renewed commitment between Azerbaijan and Armenia to make a progress on the peace process.

"Both countries have to avoid incidents – it’s critical,” he added."There is no military solution for the conflict.”