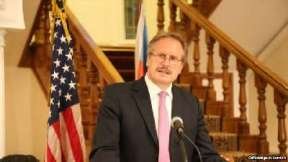 "Azerbaijan and the United States have been making collaboration for many years. Azerbaijan is involved in many peacekeeping missions, including Afghanistan, Iraq and Kosovo. Participation in these missions contributed to the development of the army of the country and to improve its military interoperability. Along with this, there were also other global issues attended by Azerbaijan ". This was stated by the US Ambassador in Baku Robert Cekuta, answering the question of Turan on the prospects of bilateral relations in the military sphere.

At the same time, Ambassador refrained to comment on the status of implementation of the US plans with respect to security in the Caspian Sea.

On the question of when the bilateral commission on human rights, which was noted in the course of the February visit of Assistant Secretary of State Victoria Nuland to Baku, will be created, the Ambassador replied: "In fact, we are discussing the establishment of a commission on democracy. Now there is a response to this question.

This question is at the stage of resolution and negotiations are underway. Ms. Nuland was in contact with senior representatives of Azerbaijan, at the same time we are negotiating. As you know, the implementation of such important initiatives requires sufficient preparation time and this issue is currently in development. "

Referring to the US aid to Nagorno-Karabakh, the Ambassador explained that it provides for those directly affected by the conflict.

Overall, US assistance to Azerbaijan has reached 115 million US Dollars. Assistance is provided in two ways: assistance to victims of the conflict and also mediation in the negotiations between the governments of Azerbaijan and Armenia in the peaceful settlement of the conflict, and this is the OSCE Minsk Group US Co-Chair James Warlick is actively involved in now, Cekuta said.

US Embassy: Military Cooperation with Azerbaijan Not Ceased