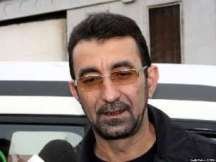 Reporters Without Borders condemns the Azerbaijani government’s harassment of the family of Ganimat Zahid, the well-known editor of the opposition newspaper Azadliq, who fled to France in 2011 and has lived there ever since.

The authorities seem to be stopping at nothing in their determination to persecute independent journalists. Instead of being satisfied with forcing Zahid to flee country, they are now hounding members of his family who are still in Azerbaijan. The family name is Zahidov.

After placing his 87-year-old mother’s home in Meysari, a village in the central Shamakhi region, under close surveillance, the police began rounding up his other relatives.

His nephew Tural Zahidov was arrested on 18 July for allegedly refusing to comply with instructions from the police and was quickly given an "administrative” sentence of 30 days in detention.

His cousin Rovshan Zahidov and another nephew, Rufat Zahidov, were arrested separately two days later. Rovshan was sentenced to 25 days of "administrative” detention on a charge of refusing to comply with police instructions while Rufat is facing 5 to 12 years in prison on a charge of drug possession under article 234.4.1 of the criminal code.

At least one other nephew is currently wanted by the police. None these relatives is involved in any journalistic or political activity.

"We are extremely shocked by the government’s persecution of Ganimat Zahid’s family,” said Johann Bihr, the head of the Reporters Without Borders Eastern Europe and Central Asia desk.

"In view of all the precedents in Azerbaijan, there can be no doubt that this wave of arrests is designed to pressure Zahid into terminating his journalistic activities. We urge the authorities to put an immediate end to these trumped-up prosecutions and to abandon the practice of collective punishment.”

Zahid, who was awarded the Reporters Without Borders Austrian section’s press freedom prize in 2009, was himself arrested on trumped-up charges in November 2007 and was not released until March 2010.

He fled the country with his wife and children the following year, after they were the targets of serious threats, and has continued to run Azadliq from exile in France, although it is being subjected to government-orchestrated economic asphyxiation.

In 2012, Zahid set about breaking down the wall of broadcast censorship by launching Azerbaycan Saati, a TV program transmitted by satellite to Azerbaijan from abroad for several hours every week. It was jammed and then ousted from the original satellite but new satellite space was quickly found.

Zahid plans to increase the length of the programs shortly. Despite the harassment of his family, he told Reporters Without Borders that nothing would convince him to terminate his journalistic activities.

In an unprecedented crackdown on civil society since the summer of 2014, Azerbaijan’s independent journalists, outspoken bloggers and human rights defenders have had to choose between prison, exile or silence. Eight journalists and four bloggers are currently detained in connection with their reporting.

Brothers of Editor of Meydan TV Arrested in Berlin

One More 'Hooligan' Behind Bars In Azerbaijan