Azerbaijan in Focus of OSCE Conference on Human Dimension 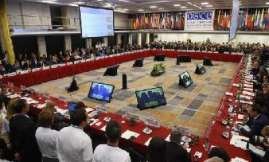 Azerbaijan has become a major theme at the meeting on the human dimension of the OSCE (HDIM - Human Dimension Implementation Meeting) opened in Warsaw on 21 September.

Azerbaijan, as an example of a country that violates fundamental obligations in the field of civil rights and freedom of speech, was the most frequently mentioned state of the 57 OSCE member states.

Azerbaijan also became the only country in respect of which an international group of civic activists held a protest in the courtroom, declaring a silent protest in T-shirts with photos of political prisoners.

The official representative of Azerbaijan at the meeting and a number of pro-government NGO leaders called criticism of Azerbaijan biased, referring to human rights abuses in Western Europe and the United States. In particular, they noted the issue of intolerance towards migrants and pressure on journalists. This position was analogous to the reaction of representatives of Russia, which was criticized mainly for its aggression against Ukraine and the annexation of the Crimea.

Although European politicians spoke at the conference on the theme of large-scale refugee pouring from the Middle East and Asia within the EU, they paid more attention to the human dimension of overriding principles - freedom of expression and freedom of the press and information.

The human dimension is a concept that includes the obligation of the Member States of the OSCE in the field of human rights and democracy. The participating States of the Helsinki Final Act of 1975 "categorically and irrevocably" declared that "the commitments undertaken in the human dimension of the OSCE are matters of direct and legitimate concern to all participating States and do not belong exclusively to the internal affairs of or any other state." They recognized that the OSCE is not only a community of values, but also a community of responsibility.

Differences of views at the meeting were most clearly evident when it came to responsibility to the commitments. The opening ceremony and the first discussions have shown that there are serious differences between the countries with established democracies and the authoritarian countries of the former Soviet Union.

This is mainly due to the fact that in countries such as Azerbaijan, Armenia, Belarus, Kazakhstan, Kyrgyzstan, Russia, Tajikistan, Turkmenistan and Uzbekistan, OSCE values are perceived by the ruling elite as declared, but not binding. The elite of these countries is sure of its impunity, because they believe that the OSCE is a consensus organization, which will not be able to use any mechanism of coercion and is bound to achieve a certain agreement in accordance with their interests.

"Member States have made a voluntary commitment, but a small part of them is executed," OSCE Special Representative on Freedom Dunja Mijatovic said, noting "the need for permanent dialogue with countries such as an exclusive tool for solving problems."

The outcome of this meeting, which will last until October 2 and includes issues of fundamental freedoms, tolerance, independence of the judiciary, the rule of law, democratic institutions, including elections and freedom of movement, will be the basis of the meeting of the Ministerial Council of the OSCE. It will be held in Belgrade on December 3-4, 2015, summarizing the Serbian chairmanship of the OSCE.

"Our organization is located in the heart of the security system and the Ministerial meeting in Belgrade will provide an opportunity to more effectively build its policy," Serbian Foreign Minister Ivica Dacic said.