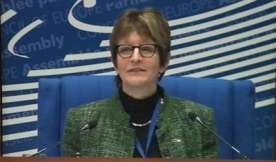 At the PACE session in Strasbourg on Monday, a report was made by its head Anne Brasseur, who devoted her speech to the issue of respect for human rights in Europe.

In particular, it noted serious violations of these rights in a number of member countries of the Council of Europe.

"In some member States, human rights defenders and civil society activists face a whole range of problems. Restrictive laws, complex and inappropriate administrative procedures and even worse, pressure, intimidation and reprisals... Unfortunately, all too often, human rights defenders and NGOs are forced to operate in extremely difficult conditions, or even illegally and in secret," she said.

Among these facts she mentioned the name of the Azerbaijani human rights defender Anar Mammadli, last year's laureate of Vaclav Havel, who is still in jail.

Calling Mammadli a political prisoner, Brasseur said with regret that during the visit to Azerbaijan, she was trying to get a meeting with him, but she was denied.

The head of the PACE noted Azerbaijan's deteriorating rights record in her speech as well questioning the willingness of Azerbaijani authorities in respecting "the fundamental values of the Council of Europe".

"The recent convictions of Leyla Yunus, Arif Yunus and Khadija Ismailova are deeply troubling. It is high time Azerbaijan changed its attitude to human rights and engaged in a root-and-branch effort to tackle systemic problems in terms of the functioning of the justice system and respect for media freedom and freedom of association and assembly,” she added.

"With Azerbaijan due to hold parliamentary elections in just over one month’s time, this is all the more important”, she said and confirmed the decision of the PACE Bureau to send an election observation delegation to Baku on 1 November 2015. Speaking purely for herself, she nevertheless said that unless the long- and short-term ODIHR observers were present, it would be very difficult, if not impossible, for the ad hoc committee to make a thorough and comprehensive assessment as to whether the election was consistent with Council of Europe standards and with Azerbaijan’s commitments to the organization.