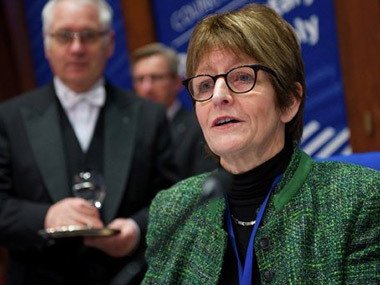 Certain laws passed by Azerbaijan regarding freedom of speech, press, judicial independence, freedom of assembly contradict commitments undertaken by Baku while becoming a member of the Council of Europe, PACE President Anne Brasseur noted during the interview with the Azerbaijani news agency "APA".

According to her, Azerbaijan has adopted majority of conventions and documents, but this is only half of the job.

"Personally, I also believe that being a chairman of our organization – can be an auspicious moment for Azerbaijan to accelerate the reform process. Among the main issues must be noted freedom of speech and expression, the press, judicial independence, freedom of assembly," said Anne Brasseur.

The Chairman said that Azerbaijan still needs to progress with some issues: "At this phase, the transition of Azerbaijan to post-monitoring stage would be a premature step. But, as I already mentioned, the acceleration of the reform process in Azerbaijan during its chairmanship is a very good opportunity. "

Anne Brasseur noted that she had the opportunity to meet with the Permanent Representative of Azerbaijan to the Council of Europe. At the same time, she and the Minister of Foreign Affairs of Azerbaijan met for talk in Vienna.

"We also had a discussion over the issues on which Azerbaijan should take a step forward. Not only the adoption of legislations is important, but also their implementation and practice. For instance, I requested in writing a meeting with imprisoned Ilgar Mamedov, a current chairman of Baku Summer School of Democracy of Council of Europe. However, the response is still missing," stated Anne Brasseur.

She believes that the members of the Assembly should be able to freely visit their families, as Ilgar Mamedov is a member of their unite family.

"Each member of the Assembly shall be entitled to enter into any country which is a member of the Council. I discussed this issue with the leaders of Permanent Representation of Azerbaijan to CoE, but, unfortunately, the answer was negative," said the chairman of the PACE.

Chairman of PACE Monitoring Committee: There are political prisoners in Azerbaijan