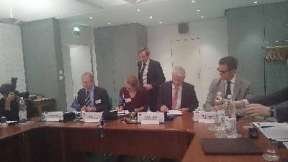 The Committee to Protect Journalists and Index on Censorship today became partners to thePlatform to promote the protection of journalism and safety of journalists, which will allow them to alert the Council of Europe on violations to media freedom in Europe.

Chief Executive of Index on Censorship Jodie Ginsberg, and European Union correspondent of the Committee to Protect Journalists Jean-Paul Marthoz signed the agreement on behalf of their organisations during a meeting with Council of Europe Secretary General Thorbjørn Jagland.

Since its launch in April 2015, the platform has recorded 84 alerts concerning 21 states. Twenty-five alerts concern physical attacks on journalists, 21 alerts the detention and imprisonment of journalists, 8 impunity of attacks, 8 harassment or intimidation, and other 22 acts that may have a chilling effect on media freedom. Eleven alerts concerned cases in which journalists were killed, eight of them in the Charlie Hebdo attack.

The platform allows these partners to issue alerts concerning media freedom threats and to bring them to the attention of the Council of Europe institutions. Once the alerts are published, the Council of Europe sends them to the authorities of the country concerned. The Council of Europe institutions may react publicly or start a dialogue on the issue with the authorities. Subsequently, responses of the member states and follow-up action taken by the competent bodies are also posted on the platform. The governments of the states concerned by the 84 alerts received have so far replied to 26 cases.