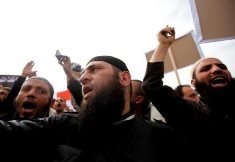 The number of religious radicals is rapidly increasing in Azerbaijan. The arrival in the Caucasus of new parties of extremists, who had received combat experience in Syria, could undermine the stability of the region from within and create problems for Russia, writes the influential Russian internet edition Lenta.ru.
The publication provides interesting statistics: 'There are more citizens of Azerbaijan in the area of the Syrian conflict, according to various estimates from 400 to 1,000. Last year, it was reported on the possible establishment in Syria of a separate 'Azerbaijani battalion.' The most famous fighter in this Transcaucasian republic is Khattab al-Azeri: in addition to participating in the battles, he had been noted for his accusations against the Azerbaijani authorities for preserving the secular nature of the state and high level of corruption.

Media often mention natives of Azerbaijan in Syria. So, for example, in January, a Turkish publication claimed that extremists executed for lack of loyalty a native of Azerbaijan, a warlord known as Siraj Azeri. Thus, to date, a significant part of the radicals from Transcaucasia left their countries and is gaining combat

The publication said that despite the exodus of active Islamists to the Middle East, one cannot say that Azerbaijan is calm. On the contrary, the situation with religious extremism in the country continues to deteriorate, and the Islamist underground is expanding and gaining strength.

According to Russian media, situation in Azerbaijan is explosive: 'Muslim Azerbaijan runs the risk of large-scale problems that could affect the entire state. Traditionally, the most restless in Azerbaijan were the northern regions adjacent to the Russian Dagestan and populated not only by Azerbaijanis but also Avars and Lezgins. It is here that from the 1990s was marked the strongest influence of emissaries from Turkey, Arab countries, as well as the Russian 'Wahhabis.' However, over the last two decades, major Salafi communities emerged and grew stronger in the capital Baku and the third largest city of Azerbaijan Sumqayit. At Friday prayers thousands of people were attracted to the most popular Salafi mosques in Baku in the 2000s (before the introduction of administrative ban). The communities, from which is recruited the majority of Islamic militants, in recent years, are often joined by people from traditional Shiite families (85 percent of the Azerbaijani population is Muslim Shiites).

Another dangerous trend that can under unfavourable circumstances undermine stability in the country from the inside is the deterioration of relations between the Shiite majority and Sunni supporters of Islam. External factors (in the Middle East today there is in fact a religious war between Sunnis and Shiites) and the bellicose rhetoric of radical representatives of both religious movements within the country are doing their job. Echoes of the Syrian conflict in Azerbaijan sounds more and more clearly.'