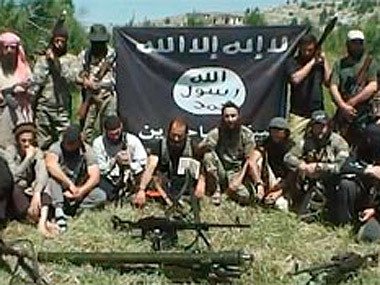 Appeal on behalf of an Azerbaijani terrorist Abu Yahy al-Azeri appeared on the YouTube. A man with a red beard is sitting in front of two dozen of armed men under the flag of "al-Qaeda". He speaks in Azerbaijani language and calls for an armed struggle against Assad.

"Dear brothers and sisters! Allah Himself has commanded us to fight in the holy land of Damascus and expel the infidels from here.

Now we have a real chance to establish Sharia law on this land and to spread to other states from here... We'll do what we can, with guns in our hands. We will kill with the help of Allah. I urge my other Azerbaijani brothers to join this holy war," says the Azerbaijani fighter.

In the last period the media reported about a number of deaths of Azerbaijani terrorists in Syria. In early April, the Turkish sites have reported that about 30 terrorists from Azerbaijan have already been killed in Syria.

In general, the links between international terrorist groups and Azerbaijan have started in early 1990s. By that time, the Azerbaijani army, having failed in the aggression against Nagorno-Karabakh Republic (NKR), retreated, suffering losses. Trying to salvage the situation, the Azerbaijani leadership headed by Heydar Aliyev attracted international terrorists and members of radical groupings from Afghanistan (Gulbuddin Hekmatyar group), Turkey ("Grey Wolves", etc.), Chechnya (Basayev and Raduev groupings etc.)to the fight against the Armenians of Nagorno-Karabakh.

Despite the involvement of thousands of foreign mercenaries and terrorists in the Azerbaijani army during the war, the Azerbaijani aggression against Nagorno-Karabakh Republic failed and the Baku authorities were forced to sign an armistice with the representatives of the NKR and Armenia. However, the international terrorists established the necessary ties in Azerbaijan and used them in the future. Recruitment was conducted among Azerbaijanis, who were later sent to Afghanistan and North Caucasus. Here they participated in the battles against the forces of the international coalition and the Russian structures.

In recent years, the Azerbaijani citizens are actively involved in terrorist and extremist activities in Russia, Afghanistan and Syria. In Azerbaijani the citizens of this republic are attracted to criminal liability for participating in "illegal armed formations" in Afghanistan and are sentenced to negligible terms of imprisonment.