Council of Europe: A good journalist is not purchasable 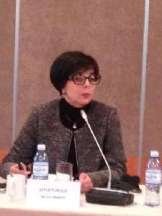 During the election period public service broadcasters should provide airtime for debate the political forces participating in the elections. This commitment provides the recommendations of the Committee of Ministers of the Council of Europe, said the  expert of the Council of Europe on media Leyla Turcilo on October 23 at a seminar in Baku, answering the question of  participants.

Seminar on "Coverage of elections in media" was organized by the Council of Europe in cooperation with the Central Election Commission and the Press Council of Azerbaijan.

Deputy Head of Socio-Political Department of Azerbaijani Presidential Administration Vugar Aliyev, announced the creation of conditions for democratic elections and the wide coverage of the election campaign in the media, including more than 300 active online media. He pointed out that 40 media have expressed their desire to participate in the campaign for a fee.

The deputy head of the CEC Natig Mammadov said the creation of conditions for holding elections in an atmosphere of transparency and registration of more than 50,000 local observers, the establishment of a web camera in 1000 polling stations to monitor the voting online.

At the same time, he acknowledged that the only professional supervisory structure is the ODIHR mission. However, the ODIHR observers cover at best five percent of the polling stations and assessment on this basis of every election, may not be representative. In addition, the ODIHR does not present evidence of its findings. Another thing is that the European Court of Human Rights, which in decisions on violations during the elections based on concrete facts.

CEC member Ghalib Orujov stressed that on the day of the vote  journalists not only give coverage of the process, but also act as observers.

However, he noted that the journalist did not have the right to make secret video secret survey, and immediately inform  on identified violations the head of the election commission. According to him, after revealing  a violation a journalist must first inform the head of the commission, and only then publish it.

Answering the question what to do if the head of the commission itself has broken the law? Orujov said that the journalist must inform the audience about the violations. However, in practice, such actions will lead to blocking the work of the journalist.

Member of the board of the Press Council Yadigar Mammadli pointed to the active use at these elections the possibilities of online media and social networks.

However, it was noted that the new media cannot completely replace traditional media, and television in particular, the debate on which allow to evaluate the possibility of candidates. The disadvantage of the current election campaign is the lack of debate on television.

The recommendations of the Council of Europe noted the need for "fair, balanced and impartial" coverage of election campaigns on television. At the same time government agencies should not be given an advantage. Political parties and leaders should have the right to respond to unfair criticism or accusations.

In addition, the media should not incite hatred on political, ethnic, religious or any other basis, not incite violence. Media should also not slander and insult.

"A good journalist is not purchasable," said the expert of the Council of Europe, and perhaps it was the main message of the event.