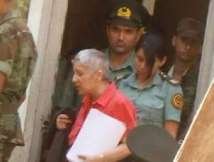 Trial in the case of  Leila and Arif Yunus appointed  for  October 15 in the Court of Appeal was postponed. Leila returned to jail, but her walking stick was taken away because when leaving the courtroom she struck   the guard with a stick. According to her relatives,  she was forced to write an explanation why she did it. Leyla Yunus wrote in the explanatory that she did not hit anyone.

Her relatives told that  on  August 14, 2015 a German doctor Witt examined her, and she was placed to the health department  of the jail. A protocol was drawn up that  she will be given all  medicines brought by  Witt, and  she will stay in this department  for  two  months, or at least 40 days.

During the medical examination and drawing up the protocols there were representative of Ministry of Health, Murad Mammadov and representative of the Chief Medical Directorate of the Prison Service Iftikhar Gurbanov. However, after the departure of the German doctor, on August 19 Leyla Yunus was discharged from the health department.

Because the  treatment has not been completed, she  still cannot move normally and needs  the stock.

In addition,  on October 7, she was deprived of telephone conversations, the ban still in effect today,  and she is not permitted to meet relatives. Turan failed  to get information in prison system.

Leyla Yunus and Arif were sentenced on  August 13, 2015 by the Baku  Serious Crimes Court to  8.5  and  7 years in prison, respectively. Both were arrested in 2014 and charged with fraud, illegal business, tax evasion. The accusation of treason against Yunus couple had been separated from production. Both are recognized as prisoners of conscience by the international organization Amnesty International. Currently, the Baku Appeal Court postponed consideration of the complaint indefinitely.