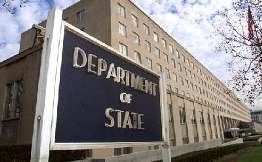 In a press statement, on State Department noted that it regrets that the Azeri government did not allow the OSCE’s Office for Democratic Institutions and Human Rights (ODIHR) to field its necessary number of observers, and therefore ODIHR was not able to monitor the elections.

'Without ODIHR participation, it is impossible for us to say that Azerbaijan has made progress on ODIHR’s previous election observation recommendations, which identified and sought to address limitations to fundamental freedoms,' Elizabeth Trudeau, director of press relations office, noted.

The ODIHR, Europe's main election watchdog, said last month restrictions imposed on it by the Azeri authorities made credible monitoring impossible, something that Baku officials deny and accuse the ODIHR on 'violating its mandate.'

In his statement to the OSCE Permanent Council last week U.S. Ambassador Daniel Baer noted that Azerbaijan was mistaken in obstructing ODIHR. 'I understand that Azerbaijan would now like a kind of special arrangement with ODIHR. While the US appreciates Azerbaijan’s engagement with ODIHR and encourages it going forward, we also understand – and I think that all participating States should understand – that part of the objective application of the methodology, the objective application of any methodology, is precisely to resist the possibility of special arrangements.'

In its turn, State Department on Monday noted it continues 'to have concerns about the restrictive political environment in Azerbaijan and urge the Azeri government to 'respect the freedoms of peaceful assembly, association, and independent voices including the media as part of its international commitments, and to work with the OSCE, including ODIHR, to this end.'

In the meantime, Washington remains 'committed to working with the government and people of Azerbaijan in their effort to ensure a strong, stable, democratic, and prosperous future.'