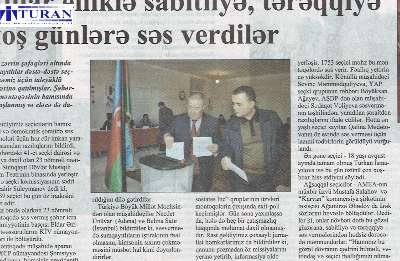 Azer Gasimov , the press secretary of Azerbaijan, who despite his status, rarely comments in the media, reacted to the negative conclusion of OSCE ODIHR of the serious violations during the presidential elections in Azerbaijan on October 9.

In an interview with "Voice of America," Gasimov called the document "biased and not objective."

Gasimov complained that the statement of the OSCE ODIHR "does not include observation delegations from the European Parliament, PACE, the OIC, the CIS, and a number of other organizations and states.” "Even a significant number of U.S. senators and congressmen expressed an opinion on transparent elections," said Gasimov.

Commenting on the support of the State Department estimates ODIHR, Gasimov criticized the elections in USA and the U.S. electoral system. According to him, in the U.S. electoral system "there are archaic, outdated procedures." Answering the question of how Washington will affect the assessment of bilateral relations, Gasimov said that such estimates will cause a negative reaction in the public opinion of Azerbaijan.