Elections on the background of human rights violations cannot be democratic 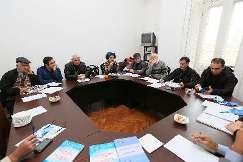 The parliamentary elections on November 1 accompanied by a violation of the law, and held against the background of serious restrictions of fundamental human rights, and a large number of political prisoners cannot be considered free and fair and reflect the will of the people. This was the leitmotif of the round table on the topic: "The situation of human rights in an election year", organized on November 10 by the Committee for Civil Society (CCS) in the office of the Azerbaijan National Committee of Helsinki Civil Assembly.

Opening the discussion, the head of the ANC HCA Arzu Abdullayeva stated steady deterioration of the human rights situation in the country over the last 10 years. "Over the last year and a half the situation has become catastrophic for civil society: leading human rights activists were arrested, restrictive laws on NGOs  were adopted,  mass audits  were conducted and bank accounts of public organizations have been frozen," she said. A report on the parliamentary elections in the context of human rights was made by a member of the Central Executive Committee, head of the Institute for Democratic Initiatives Akif Gurbanov. First, he pointed to the imperfection of the legislative framework for elections.

In 2003 the electoral legislation was in line with OSCE standards, except for the principle of formation of election commissions; but over the past 12 years, the Electoral Code was changed 17 times,  and  200 amendments were made. As a result, were limited to the terms of the election campaign, the rights of candidates, and the possibilities of appeal  on the rights violations during elections  were narrowed.

The situation with the freedom of assembly worsened, and in 2012 increased by several hundred times the fines for participating in unauthorized rallies, which made it impossible to hold demonstrations.

In the election  was eliminated the opportunity for independent monitoring by independent local NGOs, such as Election Monitoring Center and teaching democracy. The  authorities prevented the monitoring of the ODIHR, proposing to reduce the number of its delegations from 380 to 125. At the same time, authorities have accredited more than 500 international observers from other organizations.

Under such a situation, the National Council of Democratic Forces refused to participate in elections. Other opposition parties went to the polls, but faced problems at the stage of nomination and registration of candidates. Pressure was made on the voters who gave their signature in favor of the opposition, and they were forced to write  statements that they were deceived. In 46 districts, the elections turned out to be completely non-alternative in the absence of opposition candidates.

The opportunities for campaigning were severely limited. For the first time  there was not  free airtime for campaigning on television. Very high prices  were set for a paid propaganda - 3,500 manats per a minute primetime.

The IDI concluded that the elections were not free, fair, democratic,  and did not reflect the will of the people. Director of Turan news agency Mehman Aliyev made a speech on "Regulation of media during elections", pointing out that the elections were held against a background of pressure on free media, imprisonment of nine  journalists and  six bloggers.

The months preceding the elections were characterized by increased pressure on the media resources provided alternative views and conducting investigative journalism - "Radio Azadlig", "Meydan TV", and the  program "Azerbaijani hour".

The country's media is  by 99% controlled by the government and turned into a propaganda tool.

During the election campaign there were no TV debates - an integral part of democratic elections. Public television has set the price for paid campaigning tariff - 3,500 manats per minute, while commercial advertising on ITV costs 1200 manats (discounted 300-400 manats.)

Head of the monitoring of political prisoners Elshan Hasanov todl about the situation in the penitentiary system. The situation in Azerbaijani prisons  hardly differs from the situation when Stalin was in power. Prisoners live in barracks built decades ago,and suffer from torture and ill-treatment; poor health care and bribery. The only difference from Stalin's casemates is the possibility of prisoners to talk on the phone, Hasanov said. The head of "Khural" newspaper and former prisoner of conscience Avaz Zeynalli  confirmed Hasanov’s  words  on the complete lack of rights of prisoners. Because bribery many prisoners cannot get parole, he said. Prisoners are forced to pay money  for everything - meetings, using a mobile phone, a bath and others.

Summing up the discussion, Abdullayeva stressed that the authorities should understand that civil society is not the enemy of the country. On the contrary, within the group there are powers discrediting  the country.

Abdullayeva called important events the recent decision of the ECHR on the illegal arrest of Tofig Yagublu and adoption of the draft resolution on the liberation of the occupied territories of Azerbaijan.

In her opinion, the government of Azerbaijan should carry out the decisions of PACE on and human rights.

The CCS intends to appeal the prosecutor's office to punish employees of the Prison Service, guilty of torturing prisoners;  to the courts - not to place the arrested activists and journalists in the "Aquarium".

The CCS also is concerned about the traces of violence on the body of Leyla Yunus and the health problems of other convicted activists and journalists.