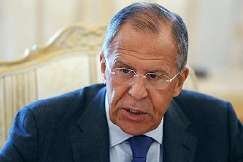 In the meantime, the opposition Armenian press reports of backstage details of Lavrov's visit. "According to information received in government circles, Russia is trying to persuade Armenia to pass Azerbaijan several districts around Nagorno-Karabakh," the newspaper Haykakan Zhamanak said.

This paper argues that in this way Moscow hopes to obtain the consent of Baku to join the Eurasian Economic Union. "According to the same sources, the main topic of discussion during the visit of Sergei Lavrov to Armenia on November 9 was exactly this issue," the newspaper said, adding that the secret negotiations on the Karabakh settlement were initiated by Russia. -02D-

Yerevan / 10.10.15 / Turan-ArmInfo: Russian Foreign Minister Sergei Lavrov held talks in Yerevan with Armenian President on the subject of the Karabakh settlement. In particular, Lavrov said that there are no alternatives to a peaceful settlement there.

During the press conference after the meeting with Armenian Foreign Minister Lavrov he was more frank.

Touching upon the Karabakh issue, Lavrov said that Moscow will continue to provide assistance to develop a mutually acceptable basis for a settlement. "This is one of the priorities of our foreign policy controlled by the Russian President Vladimir Putin, and Russia will continue to play an active role in order to achieve a positive outcome," he said.

"Any abrupt, radical actions, whoever they are made by, only harm the activity of the co-chairs of the OSCE Minsk Group," Lavrov said, commenting on the report of the PACE British MP Robert Walter on Nagorno-Karabakh.

"We - Russia, France and the United States stand firmly opposed to any attempts in the Nagorno-Karabakh settlement, instead of a serial, business, patient dialogue, to make the topic at various international platforms, which are not engaged in the settlement. At least nobody ordered them to do so on behalf of the international community," said Lavrov.