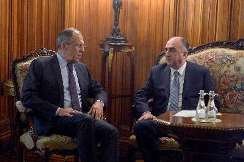 During the meeting in Moscow on Friday the foreign ministers of Russia and Azerbaijan discussed a wide range of issues of bilateral relations. Initial reports focus was on Lavrov's statement on the need for a breakthrough in the Karabakh settlement. However, other issues were also touched.

According to diplomatic sources, the parties expressed their intention to deepen bilateral cooperation in all fields "in the regional sphere, the UN, the OSCE, the Caspian Sea and in other formats," said Lavrov.

He noted that the intensification of contacts will begin "after the summer holidays" in September will be a meeting of the intergovernmental commission on trade and economic cooperation in Yekaterinburg, held an inter-regional forum.

"In September, in the Sverdlovsk region Russia will organize a major exhibition of arms and military equipment. We look forward to the Azerbaijani representatives," said Lavrov.

A conference on the development of oil and gas fields in the Russian Arctic continental shelf will be held in St.Petersburg in September .  "We hope that  Azerbaijani Energy Minister  will attend our conference, this important event,"  said the head of the Russian Foreign Ministry.

In turn, Mammadyarov pointed out the importance of "convergence of positions of Russia and Azerbaijan on all issues of bilateral cooperation."

"The political component of the positions of Russia and Azerbaijan are very similar. In particular, the positive moment is that Russia managed to sign an agreement on the Iranian nuclear program,"  he drew attention.

" We thank the Russian leadership for the providing Azerbaijan with the  observer status in the SCO. Once  such a serious decision on Iran is achieved, the Nagorno-Karabakh problem gets "back on track" for an early breakthrough in our negotiations,"  said Mammadyarov.

After talks with Mammadyarov,  Lavrov phoned  the head of the Armenian Foreign Ministry and also discussed the Karabakh settlement. Details are  not disclosed.