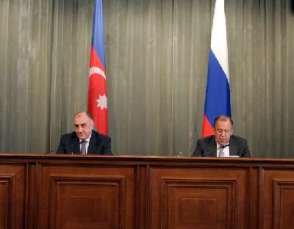 "We reviewed the international and regional problems, exchanged views on the Karabakh issue. In Russia we still consider contributing to the achievement of agreements between the parties to the conflict as one of the priorities of our foreign policy," said the head of the Russian Foreign Ministry Sergei Lavrov at a press conference after talks with his Azerbaijani counterpart Elmar Mammadyarov.

As for economic relations between the two countries, then, according to Lavrov, "the economy is developing." "Turnover last year reached, according to our statistics, a historic high, increasing by 12% compared with the previous year. This year  a positive trendis also observed," quotes RIA Novosti Lavrov.

In turn, Mamedyarov Lavrov supported the view of the successful development of economic relations.

Referring to Karabakh, Mammadyarov said that today and yesterday discussed in detail with Lavrov solution to the conflict, a solution which "is long overdue."

He further noted that the question of the status of the Caspian Seawas also raised. On this issue, the positions of Baku and Moscow largely coincide, said Mamedyarov.

The issue of Nagorno-Karabakh was actively discussed at the talks in Moscow; the issue of overripe, and it should be addressed, reports  TASS referring to the  Azerbaijani Foreign Minister Elmar Mammadyarov, after a meeting with Russian Foreign Minister Sergei Lavrov.

"I share the optimism in relation to the Nagorno-Karabakh conflict, he said. - There is a theme, there is a problem, and it should be solved. It is already overdue," TASS quoted Mammadyarov.

In his turn, Lavrov said that Russia regards the Nagorno-Karabakh issue among its foreign policy priorities.

"We continue to consider assistance in reaching an agreement between the parties to the conflict as one of the priorities of our foreign policy, Lavrov said.  We will continue to actively promote the search for mutually acceptable agreements."

"No one denies the fact that the conflict has lasted too long,  said Lavrov.  There is a real basis for reaching agreement with this, and everybody  have agreed. Now we need to translate  this understanding into the language of specific wording," he noted.