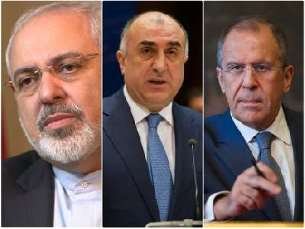 Russia's Foreign Minister Sergei Lavrov will visit Baku on April 7 for the talks with the Foreign Ministers of Azerbaijan and Iran, said on Thursday at a briefing the press-secretary of the Foreign Ministry Maria Zakharova. "It is planned to exchange views on matters of mutual interest of regional cooperation, in particular, is expected to discuss long-term transport projects and problems of multilateral cooperation in the Caspian Sea," she said.

The talk is about the railway corridor "North-South", which runs through the territory of the three countries and connecting the northern countries to the Middle East. Moscow, Baku and Tehran should agree on the issues of legal, economic and strategic nature that earned this route and become attractive. Moscow has previously held bilateral consultations on this issue with Tehran. Baku also discussed this subject with the Iranian side. The issue has not been  discussed in the trilateral format and at this level.

It is unknown if signing any documents on the results of the meeting  of the ministers is planned in Baku.