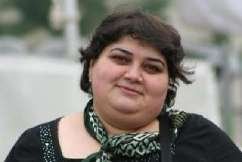 Ismayilova is a prominent investigative journalist who has dedicated her life to fighting for human rights in the oil-rich former Soviet republic of Azerbaijan, a country under increasingly harsh authoritarian rule.

As Baku bureau chief for two years at Radio Azadlig, Radio Free Europe/Radio Liberty’s Azerbaijan service, and then as anchor of a talk show, Ismayilova conducted painstaking research and reported on allegations of corruption, malfeasance, and unethical business dealings among government officials and within the ruling family’s highest ranks. She is a fierce and outspoken advocate for releasing unjustly imprisoned activists amid Azerbaijan’s ever-shrinking space for freedom of expression and association.

"Khadija Ismayilova is unshakably dedicated to seeking the truth and promoting justice, not just in the abstract but for the many of the people she has met and written about,” said Giorgi Gogia, South Caucasus director at Human Rights Watch. "Ismayilova’s integrity and courage are an inspiration.”

The Human Rights Watch Alison Des Forges Award celebrates the valor of individuals who put their lives on the line to protect the dignity and rights of others. Human Rights Watch collaborates with these courageous activists to create a world in which people live free of violence, discrimination, and oppression.

In the past two years, the Azerbaijan authorities have imprisoned many of the country’s most outspoken human rights defenders, journalists, bloggers, and many political activists on politically motivated charges, and drove others into exile or hiding.

In June, during the UN Human Rights Council session, 25 countries, led by Ireland, adopted a joint statement condemning "systematic silencing of critical voices in Azerbaijan” and calling for "immediate and unconditional release of government critics.” The UN High Commissioner for Human Rights, Zeid Ra’ad Al Hussein, also condemned the crackdown in September, and called for the release of government critics.