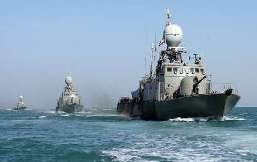 The challenging and inconsiderate behavior of Russia over the Caspian Sea continues to threaten the security of Azerbaijan and other littoral states, but there is no adequate reaction from Baku for some reason.

"Russia intends to use the airspace over the Caspian Sea to combat the "Islamic state" as long as the perpetrators of acts of terrorism are not punished," said President Vladimir Putin at a meeting with the head of Turkmenistan Berdimuhamedov. "With the tragic experience with our aircraft, we will do so as long as we see it fit, in order to punish the guilty," he said.

Today, the President of Turkmenistan is the only head of state, who expressed concern about the actions of Russia. He also showed dissatisfaction of Kazakhstan with missile launches from this area towards Syria.

In this, Putin said that Kazakhstan has not yet complained, but he will keep that in mind. Calling ballistic missiles "inconvenience", Putin justified it with the fight against terrorism.

Note that the greatest threat from missile launches is posed to Azerbaijan, because missiles are flying in its direction, and Russian planes and ships are located in the immediate vicinity of its coast. In addition, there is a violation of the sovereignty of Azerbaijan, Kazakhstan and Turkmenistan, through the sectors of which Russian long-range aircraft are flying.

Despite the serious threat, neither the Foreign Ministry nor the presidential administration comments on what is happening.

Russia and Iran have agreed with their actions and conduct military operations against the Syrian opposition, calling it a struggle against ISIS.

Due to Russia's actions, a number of international airlines canceled flights or changed the route of civil aircraft over the Caspian Sea.