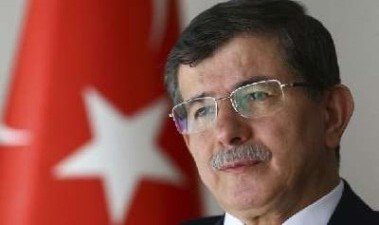 «Even now, when we are negotiating, ballistic missiles launched from Russia allegedly from the  Caspian Sea, shot the school building and hospital in Azaz. A  large numbers of civilians, including children, died, " said on Monday in Kiev  the Prime Minister of Turkey Ahmet Davutoglu at a joint press conference with Ukrainian counterpart Arseniy Yatsenyuk. According to Davutoglu, Russia today threatens the territorial integrity of three states: Georgia, Ukraine and Syria.

"Territorial integrity of Azerbaijan is also under the threat of Russia in connection with the support provided by Moscow to Armenia," said the head of the Turkish government. He stressed that at present in the Crimea there is an open violation of human rights. "We want  once again bring to the attention of the Russian authorities that the Soviet period left behind. Soviet era ended 25 years ago. Attempts to revive that time, would not be good for Russia itself. Russia's population  also will not  approve Moscow's decision to take part in this kind of "adventures" on the basis of the right of veto in the UN ",  said Davutoglu.