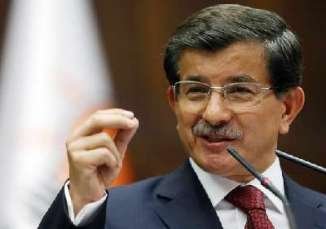 The Prime Minister of Turkey Ahmet Davutoglu condemned the air strikes on the Syrian city of Idlib, which is controlled by the rebels, and said that Syria must not become one of the aims of "imperial ambitions of Russia", reports Reuters. "Syrian land is not, and will not be part of the Russian imperialist aims," said the Turkish prime minister, speaking before the deputies of the Party of Justice and Development.

The Turkish prime minister also commented on the progress of negotiations on the restoration of diplomatic relations with Israel. According to Davutoglu, talks continue - Ankara insists on easing restrictions that Tel Aviv imposes on the message of the Gaza Strip to the outside world.

Earlier, Turkish Foreign Minister Mevlut Cavusoglu said that during the Russian operation in Syria  were killed 600 civilians, and 200 of them died on Sunday, on December 20 during a raid on a Russian aviation Idlib province. Cavusoglu says that aviation of Russia in 90% strikes on the positions of the moderate opposition or residential areas.